Once leaders get promoted they enter an environment that tends to erode their emotional intelligence. They spend less time in meaningful interactions with their staff and lose sight of how their emotional states impact those around them…  ~Dr. Travis Bradberry

“…It”s so easy to get out of touch that leaders’ EQ levels sink further. It truly is lonely at the top,” continues Bradberry. 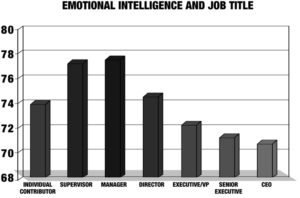 Over the years, I’ve had more than one conversation with other consultants where we’ve puzzled over how in the world a particular CEO actually got into their position in the first place. My guess is, they followed the trend lines in the graph. Their EQ was high, and that got them promoted. Then once into an executive position, they lost sight of how their emotional states impact those around them.

Here’s how Bradberry describes it.

The higher you go above middle management, the more companies focus on metrics to make hiring and promotion decisions. While these bottom-line indicators are important, it’s shortsighted to make someone a senior leader solely because of recent monetary achievements. Even worse than metrics, companies also promote leaders for their knowledge and tenure, rather than their skill in inspiring others to excel. Companies sell themselves short by selecting leaders who aren’t well-rounded enough to perform at the highest levels for the long term.

Bradberry suggests several ways to get better at not only maintaining but continuing to improve your EQ as you get promoted. These are the two I’ve seen have the greatest impact and would put at the top of the list.

Executives who are assertive, especially those who are borderline aggressive and very action-oriented, may not ignore other people’s feelings, they might do something even worse. They marginalize or “fix” other’s feelings to get them out of the way so they can continue to make progress.

Bulldozing through someone’s feelings might feel more efficient in the short-run, but the long-term damage that’s been done may take months, if not years, to rebuild and may never return to its original state. Ironically, dramatically slowing progress and reversing any trust that may have previously existed.

For the average executive, their weakest self-awareness skills are “understanding how their emotions impact others” and “recognizing the role they have played in creating difficult circumstances.” For nearly every client where I’ve been hired because things aren’t going well, the person who hired me is part of the problem. And for nearly every client like that, they aren’t aware that they are part of the problem.

Next week I’ll talk more about how to actually become more self-aware.