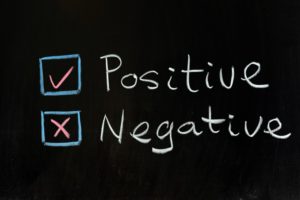 I recently heard someone describe what happened when they intentionally took a break from watching the news. After taking a hiatus for a number of days, when he returned to watching the news, he was overwhelmed by all of the “bad” news.

Yes, there is a LOT of bad news being reported. According to Ray Williams in Psychology Today, it’s as much as 17 negative news reports for every one good news story. It’s because we are wired to seek out drama and negative events. Our human brains evolved in a hunter-gatherer environment. Anything that was unusual or dramatic had to be attended to immediately for survival. Our environment has changed, but our brains still function as if we need to defend ourselves against saber-toothed tigers.

Psychology Today tells us that we pay a price for all of this negative focus, in our homes and our workplaces. “Psychologist John Gottman at the University of Washington, found that there is kind of a thermostat operating in healthy marriages that regulates the balance between positive and negative. He found that relationships run into serious problems when the negative to positive ratio becomes seriously imbalanced. He found that the magic ratio is five positive to one negative.”

Are organization leaders also falling into this bad news/negative trap? What do employees hear from their leaders and supervisors? Do they hear the “good,” or is most communication they hear from leadership filled with the “bad?”

I’m not suggesting that leaders should be Pollyannaish in their communication. But what we remember most, what we respond to is the “bad news.” Also from Psychology Today, “According to positive psychologists we can change our habits, and we can focus on the glass being half-full. When we acquire new habits, our brains acquire ‘mirror neurons’ and develop a positive perspective that can spread to other people like a virus.”

Here’s another example from the business world. Based on psychologist and business consultant, Marcial Losada’s extensive mathematical modeling, 2.9013 is the ratio of positive to negative interactions necessary to make a corporate team successful. This means that it takes about three positive comments, experiences, or expressions to fend off the languishing effects of one negative. Dip below this tipping point, now known as the Losada Line, and workplace performance quickly suffers. Rise above it—ideally, the research shows, to a ratio of 6 to 1—and teams produce their very best work.

Imagine what might happen to organizations if all leaders started following the premise of the Losada Line?  So for the next week, will you join me in intentionally out-weighing the bad with the good at a ratio of 6 to 1 by giving more words of encouragement than what you have been giving?  Let’s try it and see what results from our countercultural social experiment.