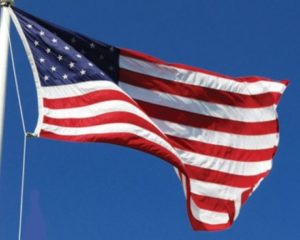 I have a dog; therefore, I have a routine. Part of that routine is a morning walk. Because I live in the city (sans trees) sometimes it’s hard to tell how windy it is and the wind in downtown Chicago can make a significant difference regarding which coat I choose to grab before we head out the door. However, I’m blessed with substantial American flags flying proudly over two nearby buildings. Those American flags not only provide a weather indicator, they also provide a daily reminder of both the freedom and sacrifice I all too frequently take for granted.

When we think of military leadership, images of Sergeant Vince Carter in Gomer Pyle may come to mind for those of us who can remember the 1960s sitcom. Someone who barks orders in a very authoritative and command style of leadership. While that made for good television, it doesn’t accurately portray the full scope of military leadership.

On a number of occasions, I’ve been asked to lead a discussion on servant leadership. If you Google servant leadership, you’ll find that many, if not most, of the examples listed will be from the military. That’s because, as the Major who I quoted today stated, “military leadership is built on the foundation of shared suffering.”

Another of my favorite leadership authors, Max De Pree, stated in the classic Leadership is an Art, “Leadership is not an easy subject to explain. A friend of mine characterizes leaders simply like this: ‘Leaders don’t inflict pain, they bear pain.’”

Simon Sinek’s most recent book Leaders Eat Last is based on a conversation Sinek had with a Marine Corps General who said, “Officers eat last.” Sinek commented, “What’s symbolic in the chow hall is deadly serious on the battlefield: Great leaders sacrifice their own comfort—even their own survival—for the good of those in their care.”

There simply isn’t a more definitive example of servant leadership than sacrificing your own survival.

Through 2002, there have been over 650,000 battle deaths. Not only is Memorial Day a time to pause and remember those who sacrificed their lives so we could live in freedom. It’s also a time to be in awe of the immense sacrificial leadership—the shared suffering—that has made our freedom possible.

Somehow the phrase we’ve all been taught to say, “thank you for your service,” seems woefully inadequate. And wishing someone “Happy Memorial Day” also feels rather out of context. Many great servant leaders, who shared suffering, have come before us. It should be our privilege to honor these leaders one day a year.

Thanks to Bryce Hoffman for sharing his conversation with an Army Major.