I believe we might be on the cusp of a 21st century shift: from a society of organizations well-managed to a society composed of networks well-led.   ~Jim Collins 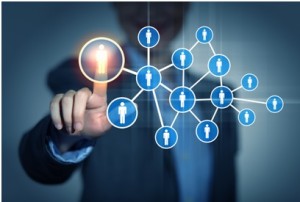 “A shift from organizations well-managed to networks well-led,” that statement caught my attention when I recently heard Jim Collins speak at a leadership summit.  Here is a bit more context for the quote from Collins.

Peter Drucker made the seminal observation that the 20th century would be characterized by a fundamental shift to where the cellular structure of free society would be organizations well-managed.  He believed that this was the best and only workable alternative to ternary; and in that he was profoundly right.  I believe we might be on the cusp of a 21st century shift, from a society of organizations well-managed to a society composed of networks well-led.

What if we were to unpack Collins’ prediction of “networks well-led,” what would that look like?

Now a very brief look at well-managed versus well-led.  Author Dave Osh describes the difference like this, “management provides control, solves problems, monitors results, and takes corrective actions to resolve deviations.  Leadership provides motivation and inspiration.  It keeps people moving in the right direction despite challenges by appealing to their values and emotions.”

What does this mean for you?

On a personal level, if you are a leader and you’re not at least part of a “network” outside of your organization that probably means you’re focused too much on managing and not enough on leading.

Here’s a specific example.  Several years ago I did some research on new academic degree programs for a college.  In the process of doing that research, I learned that what the president really wanted me to do was to identify and hand a “network” to the faculty who would oversee those programs.  Creating those connections (i.e., interconnected people) happens on an individual basis, someone else can point you in the right direction, but it’s up to you, the leader, to be creating those interconnections and building relationships outside of your organization.  Consequently, if you find a college with a highly successful academic program or department, you’ll likely find professors who are interconnected with a network and may even be unofficially leading that network.

Same concept holds true in any organization, of any size, for profit or not for profit.

So, you say you’re a leader; then what’s your network?  Is there a network that’s just waiting for you to step-up and become one of its leaders?

A year of exploring Bold Grace

Hence, the focus on my blog for 2020 will unpack and explore leading with bold grace.